Article first published as a book review on Blogcritics.

Sherlock Holmes fans are a bit like Jane Austen fans. While holding a great reverence for the original works, they are always open to a bit of playing with characters, or storylines, or just about anything related to their favorite author. While Doyle left behind 56 short stories and 4 novels about Holmes, all told it is an easy collection to read, as is Austen. Thus, perhaps, the longing for just a bit more.

Laurie King and Leslie Klinger take a decidedly different approach to the Holmesian legacy with A Study in Sherlock, which is subtitled “Stories Inspired by the Holmes Canon.” Inspired is the important word in this collection of stories edited by King and Klinger.  The 17 stories ranges from plays on canonized stories such as “The Man with the Twisted Lip,” retold as a ruse on Holmes in “The Men with the Twisted Lips,” to a graphic novel, a twitter interview, and straight up mystery stories.
The authors include many legendary names from the mystery world, including S.J. Rozan, Laura Lippman, Jan Burke, and Thomas Perry. Colin Cotterill provides the graphic novel, which tells of his adventures in attempting to write a story inspired by Holmes since he has never read nor intends to read any of this stories. Neil Gaiman makes an appearance with one of the strongest stories in the collection, “The Case of Death and Honey.” While best know for his own graphic novels and other writings, Gaiman is a life-long fan of Holmes and a member of the selective Baker Street Irregulars.
In the end, the most enjoyable stories are those which take Holmes methods and apply them in other situations. The opening story, Alan Bradley’s “You’d Better Go in Disguise,” involves Holmes himself and captures his spirit, although the setting is different as walk into the midst of a story. Lionel Chetwynd’s “The Shadow Not Cast” gives us a Holmesian like soldier called on by the police when they are out of options. The story mirrors the at times complex plots which unfolded from Doyle’s pen, although in a completely modern setting.
The overall impact of the collection is one which clearly enjoys playing in the Holmesian world, while not mocking the original source. Readers will also be introduced to several great writers and are certain to leave the work heading off in search of more writings by the authors of some of the stories. Reading begetting read — the sure sign of a good book. 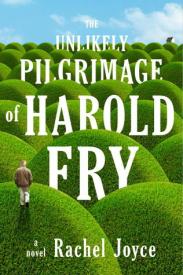 The Unlikely Pilgrimage of Harold Frystarts with a wonderful premise. Harold Fry, a man retired from work, life, and love, receives a letter from an old friend. She is dying of cancer and wants to say goodbye, which she does in the letter. Harold writes a short response back, but when arriving at a post office box to mail it he passes along and starts walking. Eventually it is a walk which takes weeks as he becomes convinced his friend Queenie will stay alive as long as he is walking toward her.
The walk gives Harold and his wife left at home plenty of time to consider many things. How did they live their lives, what is their relationship with their son, what is their relationship to each other? Do they love each other? What happened to the romance which bloomed early in their marriage? While the book focuses on Harold’s walk, the reader is watching his wife Maureen’s reaction as much as Harold’s musings.
The absurdity of the walk is one of the reasons it attracts us. Harold is not a walker before this. He is not even in shape and he is not young. He does not love nature and he does love his comforts. Yet he embarks on the walk with no clear intention, no supplies, and a pair of yachting shoes to complete several hundred miles of walking. Along the way he meets a host of characters who serve as foils to his thinking, thus pushing him forward physically and emotionally. It is in his reflections that author Rachel Joyce teeters on the cliff of “the obvious.” Just how many more things is Harold going to reflect on from his past? But just when it becomes too much, a new group of characters emerges as Harold is joined in a now public pilgrimage.
Joyce  has a keen eye for the public and excels as she creates a cast of characters which are all too realistic next to Harold’s quasi-spiritual pilgrimage. While everyone else wants to saint him we begin to see him in a new light — a light which shows his human failings while only making him more endearing to the reader.
In other words, Joyce has created a work in the epic tradition of the quest. From the outset of literature no theme has been more prevalent. From the Odyssey to Huckleberry Finn to to Marilynn Robinson’s , the quest for something more is a reflection of a human longing. Joyce has created a character we admire because in part we want to be him. We want to seek out on a new journey with only our wits to save us (gasp–he does not even have his cell phone). We want to meet physical, emotional, and spiritual dilemmas and push through them. We want to be challenged and then succeed beyond our own expectations. Like any good quest, the Harold Fry we meet at the outset of the novel is not the Harold Fry we goodbye to at the end.
Much of what happens or is revealed toward the end of the book alters your perception of what has occurred, so I’ll resist any temptation to spoil the plot for you. If the book has any success you can count on a movie. Joyce is a playwright for the BBC and much of the book could be dropped on screen as is. This is not a critique of it since as a novel, it still works.

Error: Twitter did not respond. Please wait a few minutes and refresh this page.

Looking at dying and death for what it is: a part of life.

A Place for Everything...(everything in it's place).

Life, Love and the Pursuit of Happiness. All Opinion, All of the Time.

Chronicles of a Grieving Momma...

Momming and dealing with grief - at the same time.

The Legacy of Leo

The Sand and the Water
Aleteia — Catholic Spirituality, Lifestyle, World News, and Culture

Aleteia is a worldwide network providing daily content designed to inspire readers in their daily life.

Homilies and thoughts from a Roman Catholic Priest

A Parish Priest with a Few Things to Say

Listen to your inner self..it has all the answers..

The Journey of My Left Foot (whilst remembering my son)

I have Malignant Melanoma, my son had Testicular Cancer

Journey on strength and healing through child loss

super trooper
Beyond A Mothers Mind

One mom's journey through life, love, and loss.

You Can Trust Him.

God's Faithfulness for the Grieving Parent

"I have enough time to rest, but I don't have a minute to waste". Come and catch me with your wise words and we will have some fun with our words of wisdom.

Tales from the mouth of a wolf